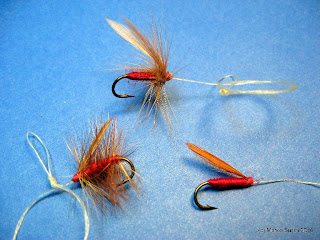 In approximately two hundred AD, a man, a Roman commentator named Claudius Ælianus, wrote an account, most likely received third hand, that has caused no end of controversy to the present day and more then likely, for ever after as well.  It concerns a method of fishing, with a fly, as practiced at the time in , and is pretty much the first written record of a fly pattern, however incomplete, that we have today.  I will not go any further into the man we call Aelian, Dr. Andrew Herd in his lovely history, found at http://www.flyfishinghistory.com/aelian.htm has done a far better job than I could.  I highly recommend the reading of this site for those of a historical mind.
The fly and the method of its use is described in the following passage, from the translation by Radcliffe, in his “Fishing from the Earliest Times,” (1921).
“I have heard of a Macedonian way of catching fish, and it is this: between Borœa and Thessalonica runs a river called the Astræus, and in it there are fish with speckled skins; what the natives of the country call them you had better ask the Macedonians. These fish feed upon a fly peculiar to the country, which hovers on the river. It is not like the flies found elsewhere, nor does it resemble a wasp in appearance, nor in shape would one justly describe it as a midge or a bee, yet it has something of each of these. In boldness it is like a fly, in size you might call it a midge, it imitates the colour of a wasp, and it hums like a bee. The natives generally call it the Hippouros.
These flies seek their food over the river, but do not escape the observation of the fish swimming below. When then the fish observes a fly on the surface, it swims quietly up, afraid to stir the water above, lest it should scare away its prey; then coming up by its shadow, it opens its mouth gently and gulps down the fly, like a wolf carrying off a sheep from the fold or an eagle a goose from the farmyard; having done this it goes below the rippling water.
Now though the fishermen know this, they do not use these flies at all for bait for fish; for if a man’s hand touch them, they lose their natural colour, their wings wither, and they become unfit food for the fish. For this reason they have nothing to do with them, hating them for their bad character; but they have planned a snare for the fish, and get the better of them by their fisherman’s craft.
They fasten red (crimson red) wool around a hook, and fix onto the wool two feathers which grow under a cock’s wattles, and which in colour are like wax. Their rod is six feet long, and their line is the same length. Then they throw their snare, and the fish, attracted and maddened by the colour, comes straight at it, thinking from the pretty sight to gain a dainty mouthful; when, however, it opens its jaws, it is caught by the hook, and enjoys a bitter repast, a captive.”
I have put in italics the pattern, and include below a few other translations of this pattern to show how different it can be, depending on the author.
“Round the hook they twist scarlet wool and two wings are secured on this wool from the feathers which grow under the wattles of a cock, brought up to the proper colour with wax.” Bibliotheca Piscatoria, Westwood and Satchell, 1883.
“They wrap the hook in scarlet wool, and to the wool they attach two feathers that grow beneath a cock's wattles and are the colour of wax” Scholfield Translation
I have examined these texts and find that despite the differences, the gist of them remains, and pictured here are my interpretation of the possibilities these patterns present.
Sources:
http://www.flyfishinghistory.com/aelian.htm
http://books.google.com/books?id=T_wSAAAAYAAJ&pg=PA1&lpg=PA1&dq=bibliotheca+piscatoria+westwood&source=bl&ots=RfNs12MzWw&sig=jHkitHpQtAfraXl2cedXi_cdhoY#v=onepage&q&f=false
Posted by atlanticsalmonflyguy at 12:04 PM 1 comment: